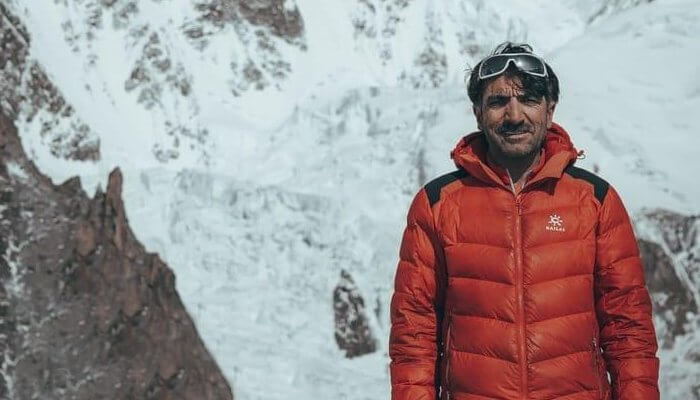 Our very own Muhammad Ali belonging to Sadpara village of Baltistan division once used to carry the luggage of foreign mountaineers and he used to climb the mountains as a high altitude potter. In North Pakistan, most of the people were working as a potter in the early ’90s for the sake of income but it becomes a passion later for many of them and Muhammad Ali was/is one of them.

He was only Muhammad Ali but with the passage of time, he became known as Muhammad Ali Sadpara. His passion is acknowledged by his villagers by giving him the surname “sad para” when he completed the summit of Ghashabrum 1, Ghashabrum 2, and other high altitude peaks in the Himalayan and Karakorum region of Pakistan. Later on, he came into the limelight of Pakistan’s media when he successfully completed the winter expedition of the Killer Mountain Nanga Parbat in 2016. Till then, nobody was able to summit this mountain during winters but Sadpara’s courage, commitment, and passion defeated the height and harsh conditions of Nanga Parbat. His success not only stops here. He also climbed the Broad Peak in the Baltistan region along with other eight thousand meters high mountains internationally and raised the flag of Pakistan there many times.

The passion of Sadpara was so strong and his courage was higher than the height of K2 the second highest peak in the world. That’s the reason why he climbed the world’s second-highest peak K2 in 2018 and yet again marked his name in the mainstream media of the country by raising Pakistan’s flag there on the K2.

It is said that once you start loving a mountain, it loves you back to the extent that it starts attracting you towards itself until it takes your life. Sadpara’s love for the mountains is not different as well, that is the reason I think why he planned to summit K2 for the second time that too in the winter season as the winter summit is considered the most difficult summit for a mountaineering community. Sadpara along with his son and other international climbers had to return to base camp due to bad weather conditions in the first attempt of winter summit 2021 but on the 5th Feb, they started their journey to chase the heights of K2. Unfortunately, Sadpara’s son returned from a bottleneck of K2 some 450 meters below the apex due to oxygen regulator failure but his father and the other two members continued their journey. According to Sadpara’s son, his father and two other members are missing while returning after a successful summit of K2 and now the survival also remains doubtful because surviving at minus 60 degrees with limited food in the death zone of heights is very difficult. A miracle and lots of prayers can keep our hero and his companions safe and sound where there is no one but only GOD and snow.